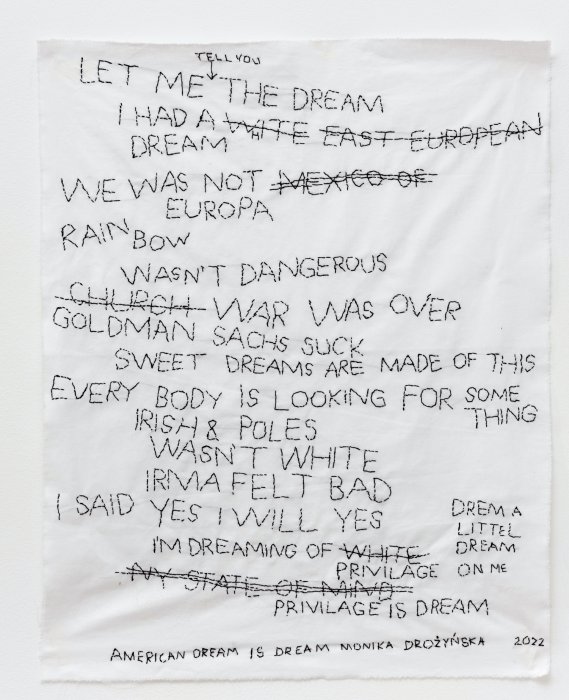 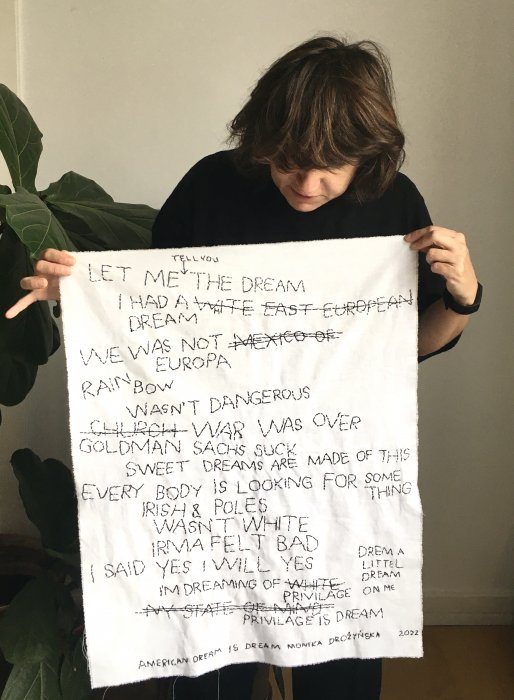 The project titled American Dream is Dream paraphrases passages from feminist theory, psychoanalysis, pop culture, and politics. I quote Hélène Cixous, Martin Luther King, Sigmund Freud, Annie Lennox, Irving Berlin, Occupy Wall Street movement. I created an original language written in embroidery with formal treatments of cross-outs, with which I record the state between agreeing with the phenomenon described, with simultaneous disagreement.
I consciously use mistakes to introduce Freudian confusion into the written language. I combine my fantasies of American culture with my personal experiences: I'm Polish, and a citizen of Eastern Europe. American Dream is Dream tells the story of the American dream which is often equated with white privilege.
"LET ME TELL YOU THE DREAM" is a paraphrase of "Let me tell you the story."
I tell the story related to dreaming on different levels.
"I HAD" with a crossed-out thread a "WHITE EAST EUROPEAN DREAM" is a reference to Martin Luther King's 1963 speech, in which the leitmotif was his famous "I have a dream." The paraphrase "I HAD" instead of "I HAVE" is a mistake. In this project it can be counted as a Freudian Slip.
"WE WAS NOT MEXICO OF EUROPA" is a paraphrase of the words "Poland is Mexico of Europe" by Grzegorz Stępniak, a Polish film theorist who compared Poland to Mexico, both pariahs of their continents.
"RAINBOW WASN'T DANGEROUS" here I refer to a dream in which the rainbow was not dangerous. In Poland, even the symbol of the rainbow can be dangerous. Children are not allowed to draw it in schools. Law and Justice (PiS) the far-right Polish political party that governs the country since 2015, has made the LGBTQ movement the part of its enemy list.
"CHURCH WAR WAS OVER" the notation with a deletion is a formal procedure in which I captured the change. Something was there, but it is gone. Something is there, but it isn't. The conflict is written into this line, as much as the Church in Poland antagonizes people. By replacing CHURCH with the word WAR, I am talking so to speak about the same thing. War and church are the same thing in Poland. But with this one change––cross out––I create a new content and a new reality. In dream, church and war are both over, they don't exist.
"GOLDMAN SACHS SUCKS" it's a rhyme from Broken English and from a text from Occupy Wall Street, a movement against economic inequality and the influence of money on politics. Alessio Rastani said in 2011: "Governments don't run the world, Goldman Sachs rules the world."
"SWEET DREAMS ARE MADE OF THIS. EVERYBODY IS LOOKING FOR SOMETHING" is a quote from a
song from 1983, by British new wave music duo Eurythmics. Annie Lennox's androgynous look accentuated this nihilistic striving for something and anything.
"IRISH AND POLES WEREN'T WHITE" here I refer to the19th century wave of emigration to the USA from Europe, when the Irish and Poles were not counted as members of the white race. I do understand this sense of inferiority and isolation. Speaking Broken English, I associate myself with the so-called Second Europe, when I'm in the countries where English is the first language.
"IRMA FELT BAD" is a quote from the 1899 book by Sigmund Freud titled The Interpretation of Dreams. Freud described his own dream about his patient - Irma. I am also searching what I feel is in my conscious and subconscious mind.
"I SAID YES, I WILL YES" is a quote from Hélène Cixous's "Laughing Medusa" (1975). I follow Cixous's call for writing the women's story through any kind of language.
"I'M DREAMING OF THE WHITE PRIVILEGE" refers to the 1942 song "I'm Dreaming of a White Christmas" by Irving Berlin. It does not only refer to Christmas but primarily to the reality of white privilege. You must be privileged to dream.
"NY STATE OF MIND" is a song written by Billy Joel from 1976. It's an unreal state of mind.
"PRIVILAGE IS DREAM" and Dreaming is the Privileged.

The project will be presented using posters and stickers with a QR code, which is appearing in Rochester and New York. As part of the Rochester University study visit and the Residency Unlimited residency program.