I've Been in Poland a Few Times [sic] 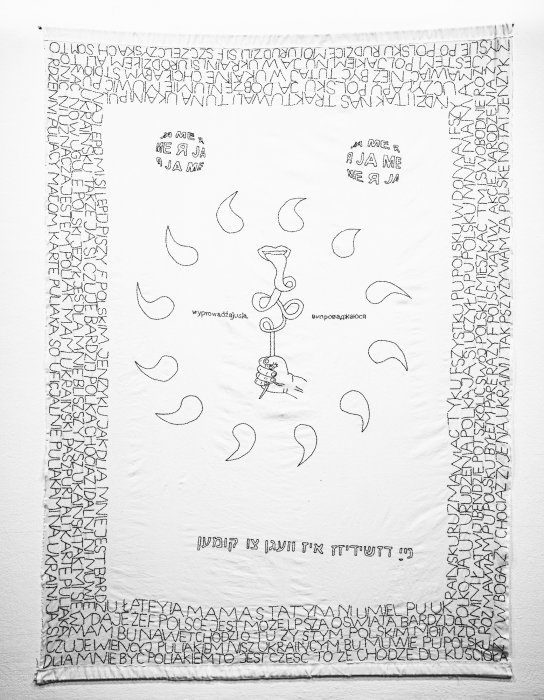 I've Been in Poland a Few Times [sic]
This is a story about the way migration shapes language. At the centre of the fabric, I embroidered the Ukrainian symbol ( ҉ ), which stands for 'million. The two sphere-shaped symbols are a mixture of the word 'I' in Polish, English and Ukrainian. The Yiddish phrase situated lower down translates as 'a new language/tongue is about to emerge'. The fabric is framed by quotations from interviews with people from the Ukrainian village of Strzelczyska3, which is inhabited almost entirely by Poles. The conversations were carried out as part of a sociolinguistic study conducted by Ewa Dzięgiel of the Polish Academy of Sciences into the shaping of bilingualism amongst people of Polish origins in Ukraine.
What might the Polish language be like in the future? How might it sound? The migration of people from Ukraine to Poland is rebuilding the cultural diversity lost to our country after 1945. In the future, a multicultural society will communicate in a new language which could well trigger thoughts of Yiddish. The language of the Jewish diaspora, Yiddish emerged in the tenth century as a colloquial form of speech combining the Germanic and Slavic languages with the addition of vocabulary from Hebrew. Expressions in the emerging tongue will endow it with corporeality; people of different nationalities will forge relationships and their children will speak a mingled language.