I have a gesture 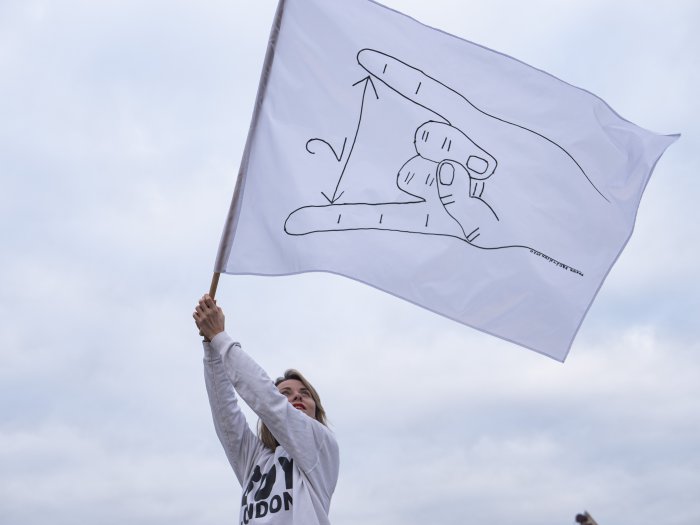 The first symbol used in the flag is a drawing from the fabric that was created during the first locket. The drawing shows the well-known and often used in Polish history sign of fingers stretched in Victoria's gesture, indicating the distance between them. The symbol reflects the frustration and helplessness that many people around the world found themselves in during the first lockdown.

After the presidential election, an election campaign with elements to promote hate speech, the flags with the V mark have a new, critical meaning. It turned out, however, that evil can have even bigger horns. The procedure of the Constitutional Court for an anti-abortion law during the second wave of the pandemic proved to be a Machiavellian intrigue. The parliamentary majority took people to the streets, putting them at risk of loss of health and life. The Deputy Prime Minister made a speech in which he ratted out one social group to another, ignoring the caring role of the state.
The symbol on another pandemic flag from the second lockdown period is widely known as the symbol of the devil, associated mainly with the heavymetal subculture.
However, it may have a different meaning, depending on religion and nationality. It means love or worship.

I have a gesture that the second covid flag of Dro¿yna says: be careful, do not trust, check. Politics is a war conducted using populist language of care. Be close to your loved ones.