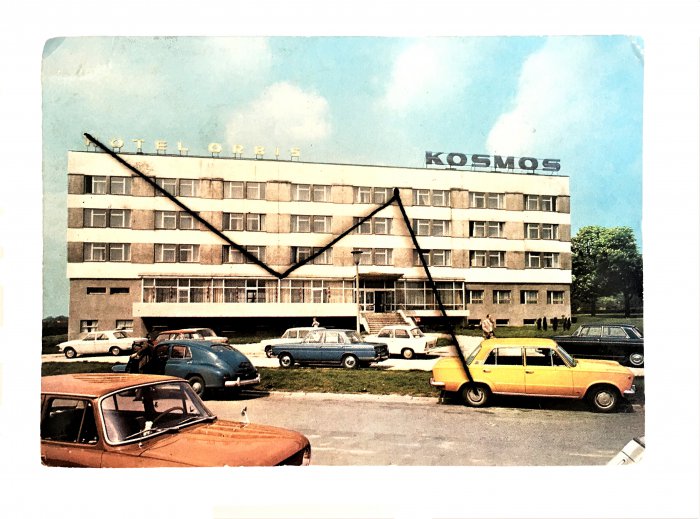 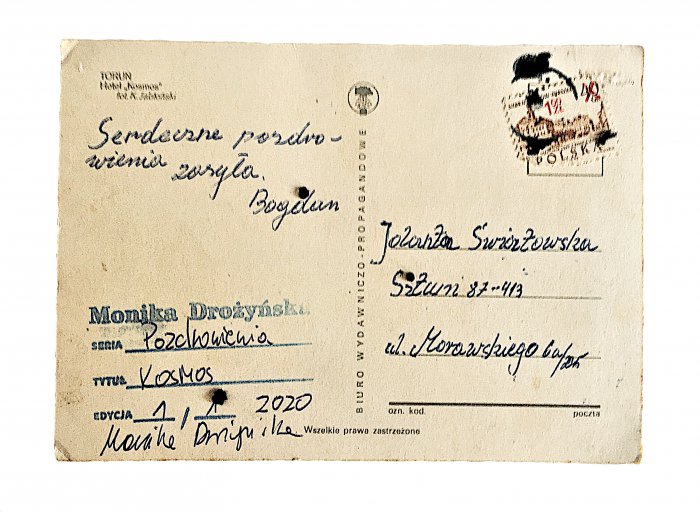 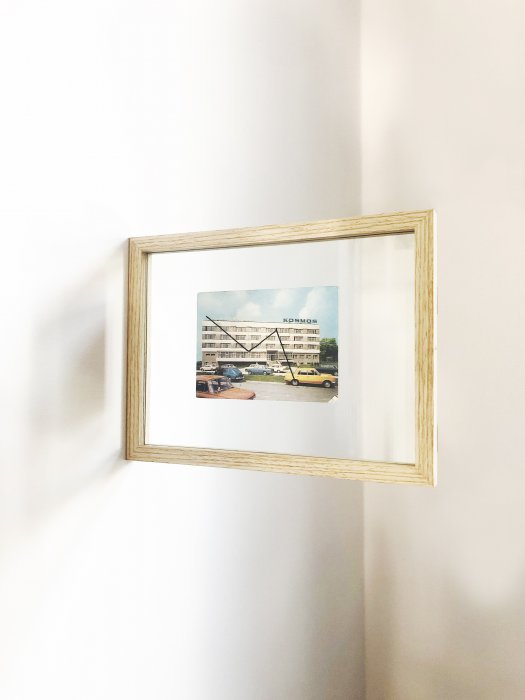 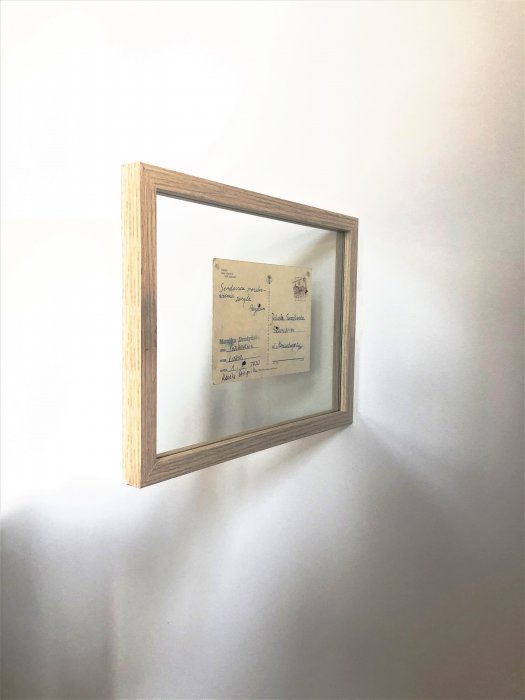 I opened the door to air out the room—there wasn't a sound in the hall— ... I shut the door, locked it, sat in the middle of the room and struggled to get a grip on myself. ... Every analytical reflex was as if submerged in thick syrup, wrapped and smothered in a porridge of self-satisfaction, all dripping with the honey of idiotic optimism; ... Bursting with love for my fellow man, I felt a driving need to lend a helping hand, to do what can only be described as 'good works'.1

Greetings/The Cosmos is a piece produced in the technique of hand embroidery on an old, second-hand postcard. The card was sent to an addressee, but a post stamp suggests that it was not mailed from its place of purchase. The distance between the postcard's place of origin and place of posting became an inspiration for making the embroidery. It is a story of perfection and imperfection of memory.

A photograph on the postcard depicts the Kosmos Hotel, erected in Toruń to celebrate the Copernican Year of 1973.2 The building has not survived, demolished in 2007 to create space for a new hotel. Emotions expressed in the gesture of mailing greetings are the survivors.
A relationship between Bogdan and Jolanta – the male and female addressee - appears in this case via a memory of ones about the others. I draw a conclusion based on my own experience that the sender forgot to send the card. Nonetheless, the memory is imperfect and filled with moving tenderness. A construction of the memory is fragile, while a foundation of mutually nurtured feelings is a basis for the nurturing.

What is a postcard mailed with greetings? If not an expression of love communicated thanks to memory?
Sings I draw with thread on paper are a record of "regaining memory". As a person who has come from the outside into possession of the postcard, I feel like a foreign voyeur. I am looking at a thing I should not be, taking part in a thing not familiar. I create a careful gaze, which I record in embroidery on the postcard.
Every gesture, word, thought can shape the future of subsequent generations. The future interests me in its universal and individual human aspect. It is hidden in the guise of micro gestures performed day to day. Love, care, gratitude is one of the most essential resources, a guarantee of the future, filled with deep respect for life.

The reverse of the postcard reads: "Sincere greetings, Cordially, Bogdan". He sent the cordial message to Jolanta, who might have been waiting for it. I perform a similar gesture with the piece Greetings/The Cosmos: I am cordially sending sincere greetings to all those who will see the piece, hoping that they will pass the kindness on, to next generations.